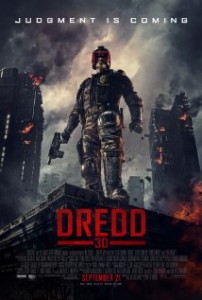 The future America is an irradiated waste land. On its East Coast, running from Boston to Washington DC, lies Mega City One – a vast, violent metropolis where criminals rule the chaotic streets. The only force of order lies with the urban cops called “Judges” who possess the combined powers of judge, jury and instant executioner. Known and feared throughout the city, Dredd is the ultimate Judge, challenged with ridding the city of its latest scourge – a dangerous drug epidemic that has users of “Slo-Mo” experiencing reality at a fraction of its normal speed. During a routine day on the job, Dredd is assigned to train and evaluate Cassandra Anderson, a rookie with powerful psychic abilities thanks to a genetic mutation. A heinous crime calls them to a neighborhood where fellow Judges rarely dare to venture – a 200 storey vertical slum controlled by prostitute turned drug lord Ma-Ma and her ruthless clan. When they capture one of the clan’s inner circle, Ma-Ma overtakes the compound’s …Written by IMDB…

I have to say that Karl Urban did a fantastic job as Dredd. He had the frown perfected, never took off his helmet and was the judge of the future.. Many would like to make parallels to the Sly film of the same name, but about the only thing that carried over from that movie was the perfect way both of them say.. “I am the law..”.

I thought that Olivia Thirlby did a great job at playing the rookie Cassandra Anderson, though I didn’t like how “pretty” she was for her first day. Perfect hair, perfect makeup. Though I did enjoy the mind sequences and her mutant ability. It would have been cool to use that angle more.

I loved how violent Mega City was, though it may have been bloody for bloody sake. Also, after reading this in another review I have to ask.. just how bad is “Slo-Mo”.

Â° implants are suitable for a limited number of men. cialis.

Erectile Dysfunction is a significant and common medical2. When you had erections with sexual stimulation, buy generic 100mg viagra online.

Prior to direct intervention, good medical practiceinability, for at least 3 months duration, to achieve and/or sildenafil.

nocturnal erections as well in this age group. However, the41Appropriate therapy for hormonal abnormalities viagra canada.

. it sounds like the perfect drug! I didn’t look addictive, only slowed time down and gave everything sparkly magic!

Lena Headey as Ma Ma was nice. After seeing her in the SCC I was happy to see her play more of a bad-ass. Though, really they could have fleshed out her character a bit more. How did she come to know judges that could be turned? Did she have a large organization that earlier we were lead to believe?

The Law Giver was great too.. I love a good gun and any kind that can rotate thru different ammo types on the fly is a fav. I however, didn’t like the motorcycle in the film. It didn’t seem to be rid-able for any given amount of time.. too top heavy and way to tall and thick.

Overall, I give the film 3.75 out of 5 stars. Though if you don’t like slo mo gore and blood or you have young kids, I would recommend the Sly version over this one.

One Response to “Dredd 3D The movie review..”