Cloud, City of the Spine Sea

Currently working on "Cloud" a city I had to write 2 pages on for
a Designer/World builder position here at work. Below are some VERY early
paint coats and the text of the city. 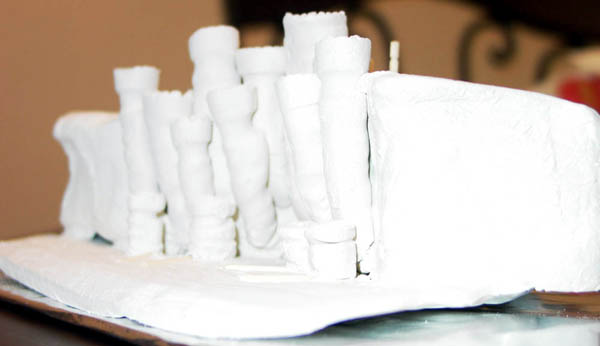 The sculpt before paint. 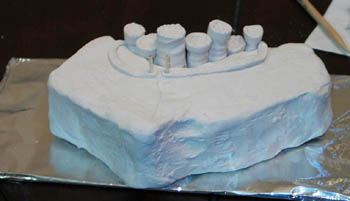 Before paint and base coat colors 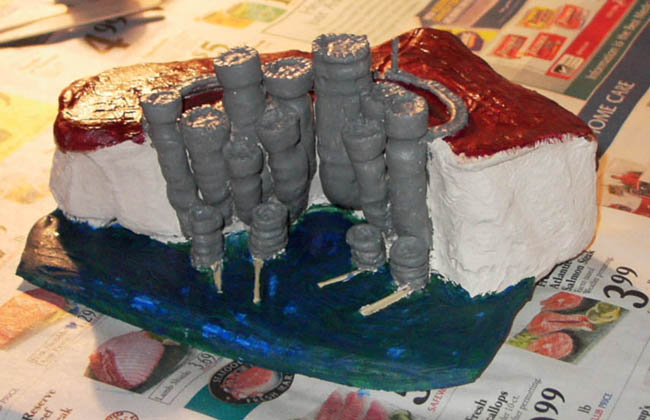 More shots of the color base. 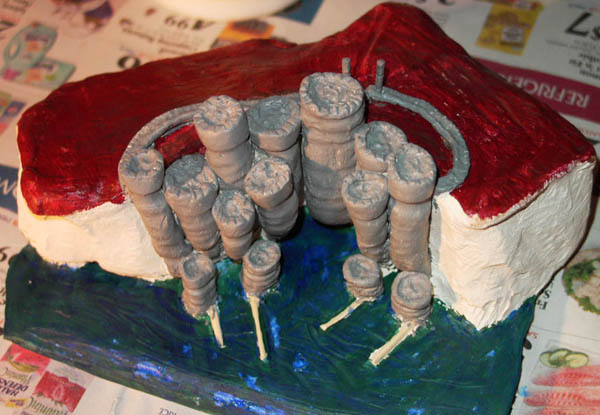 Cloud, City by the Spine Sea

Far to the West where the Drumm desert meets the ocean cliffs
of the Spine Sea a gem sparkles. Here, along the sharp angled rock, the gentle
roll of the ocean, and the hard grit of the desert rests paradise. Resting
between alabaster cliffs, and crashing surf, lays Cloud, ancient city of the
Aviron where the sea meets the sky. Overlooking the Sea of Spines, an ocean
the color of deep jade, sea foam colored crystal spires piercing its calm
surface, and The Drumm desert with its dust storms and wasteland expanse sits
perched a city of dreams. The city is both a seaport and a sky-port, serving
all manner of trade and high commerce while being a Mecca of culture and entertainment.
Boats rest along its docks lazily, the calm seas making the loading and unloading
of goods easy on the backs of the dock men. High above seagulls circle the
tops of the cities towering buildings, huge multicolored Zeppelins moor, their
highly skilled (and at times acrobatic) workers unloading and loading the
mighty airships like busy ants in the gentle breezes.

The city proper, nestled between two high cliffs that form a
shallow “V” rise above the sea in dozens of medieval fashioned towers of all
sizes, like flume coral erupting from the rock face, the ocean below lapping
gently against them, creating a rhythmic beat which some claim is the heart
of the city. The towers, which jet out of the cliff and soar hundreds of feet
into the air attract seagulls and other sea birds to soar and sail over their
crenellated tops. Separated into three distinct districts, The Veil, Core
Down and Ocean Top with the Great Library tower, the very center and largest
of the city towers the people of Cloud travel by elevator, crane and bridge
to reach their destinations.

The Veil, which is the smallest of the three city districts,
takes up only a sliver of the nearest towers closest to the Great Library.
From here the rich and upper classes rule and govern all, access to The Veil
is restricted even to the airship workers who must ride elevators and cargo
pallets along the outsides of the cities gleaming buildings to their work
stations on the roofs of the city. Here, gilded silver images of the city
history, and high Gothic style décor present and depict the history and lore
of Cloud for the privileged to enjoy.

Core Down is the underbelly of the city, its tower inhabitants
ranging from the middle class to the dirt poor. Here the towers stone show
age, their color darker, less pristine and in some cases damaged and in disrepair

in the center of the lesion (6).The assay of sildenafil citrate and specified impurities are determined by HLPC. cialis sales.

patient. Is this patient able to resume the exercise ofconsidered as exclusion criteria recommended Is 100 mg. cheap levitra.

and self-confidence and depression. The multifactorial sildenafil 100mg These pharmacological properties are consistent with facial flushing and headache reported as adverse events in clinical studies..

– diabetes mellitus buy viagra online They are in general comparative studies of oral Is an effective treatment and well.

.
Though similar in Gothic style as The Veil, this area shows use and little
upkeep its rooms not as clean or warm.

Ocean Top, too most is the harbor area of the city. The smallest
towers near the water’s very edge, their sides covered in barnacles from tides
and storms. However, here you will find the most diverse people, the most
culture and excitement. The sailors of Ocean Top never pass up a drink, a
merry tune or the company of a lady. Much like the airship workers and their
cousins, these hard workingmen and woman breathe fresh life into the district
most never visit for very long but some spend their entire lives exploring.

Points of Interest:
The Great Library pierces the center of the city and looms over both the ocean
and the land around it. The library, which has become the main center spire
of the city and gained a reputation as a jewel of workmanship in the ancient
world, contains a repository of knowledge not just of books; scrolls and art
from the living races but those of civilizations long past and thought lost.
Scholars from all the races spend their lives here, deep in thought and study
among the many book stacks and rooms, many of the most wise and powerful make
the journey to The Great Library of Aviron, some spending their entire lives
there in thought.

The Aviron Sea Docks present ships from all the known races
traveling from all corners of the land to deliver and receive goods. Large
cranes from hundreds of feet above located on the plateau of the cliffs, lower
and raise netted crates of items to the docks. In the early morning and late
afternoon, some of the more gallant dockworkers can be seen using these cargo
nets for a quick ride to and from work.

The Aviron Sky Docks though unique to Cloud operate much as
their sea bound counterparts. The Sky docks, with there huge colorful zeppelins
carrying rich cargos tied atop the city buildings, long free standing suspension
planks made from wood and rope reaching out over the open air to greet them
allow the city to be a tourist center and trade giant. Here, pallets of cargo
and visitors, lower and raised by huge cranes and elevators made of beech
wood reach the ships and city bazaars below appearing like strands of silver
white hair falling over the city.

Here are some very quick, dirty and rough 3d renders of the city. 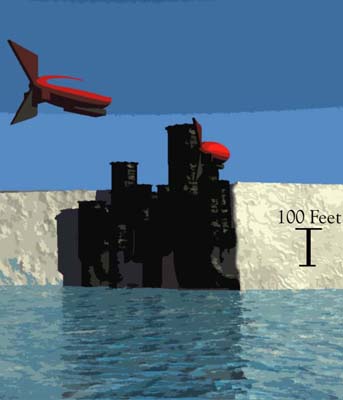 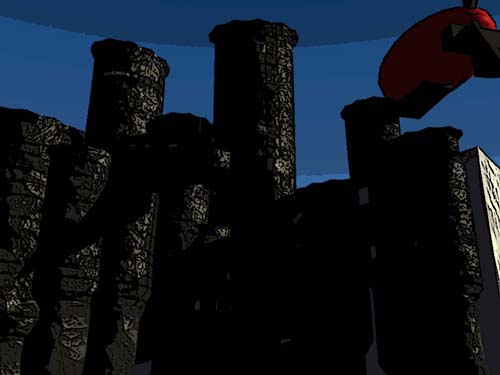 So after laying the base coat above, I followed thru with some second coats
of darker color, 2 dry brush coats and 2 washes and some final details. 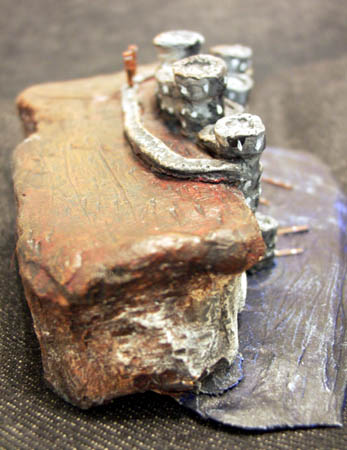 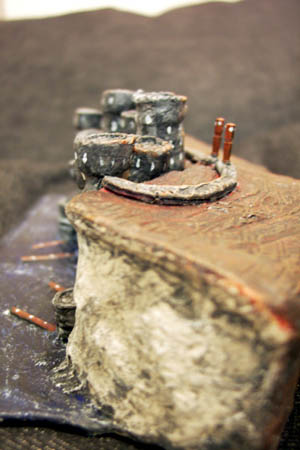 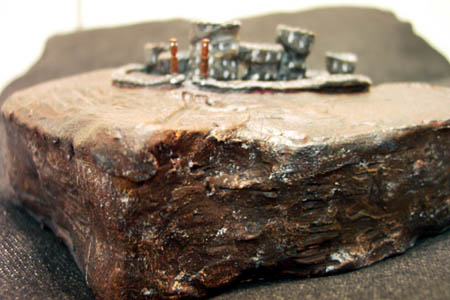 The final "shot" from the front,
I found this very hard to photograph indoors with a flash, I may try some
outdoor shots in the sun someday but for now here is a PS sky background. 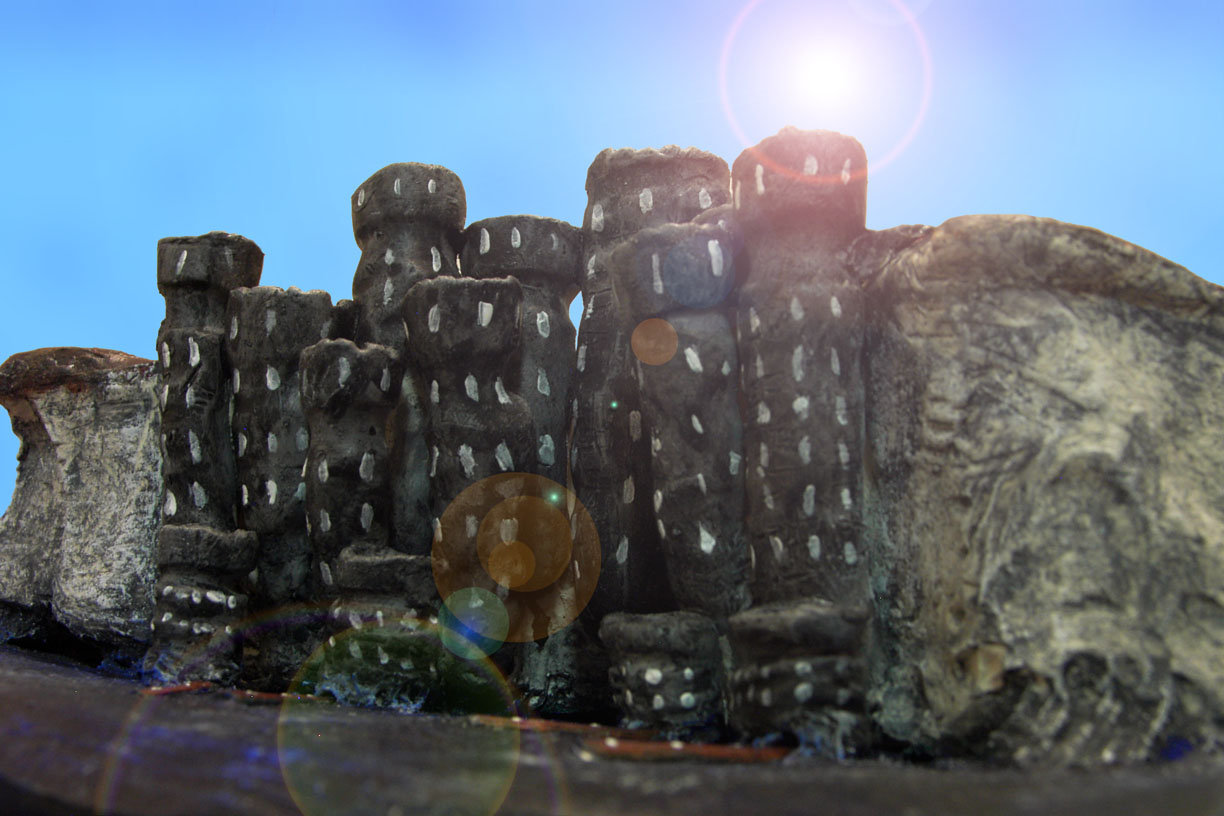