Alright, prep yourself for a good 3-6 hour day!! This is a two person job so
don’t skimp!! Myself and my buddy "Ballz" (Dan) started around 11am
and finished around 7pm (several breaks and lunch and dinner) Though it looks
like Ballz is doing all the work he is simply a photo stand in!! I did everything
and he only posed for the photo’s that bastard!! Ok, well he helped alot really
and I would probably still be out in the driveway with a screw driver poking
myself =)

NO bump stops were cut or trimmed in this install. I called RRM just to find
out what the hell a bump stop was and was told that Progress now recommends
that the stops NOT be cut. So we considered ourself lucky and saved ourselves
a step. Ok, now to the hard part… installing…

Gently remove all the button pops that hold the molded carpet in place. You’ll
need to remove the plastic molding which outlines the back seat. Use extra special
care when removing the button pops or see your local dealer for replacements.
To this day we have not found out what the blue dot does… mysteries of the
unknown!! 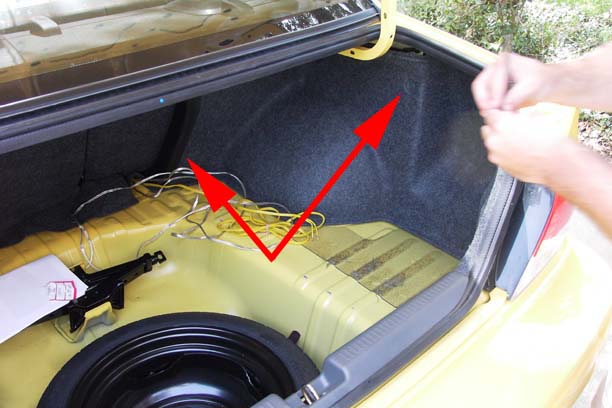 Step #2 Jack the rear up it is as I found easier to loosen the rear upper strut
bolts while the car in on the ground as jacking it up makes reaching into the
trunk one of those "Tall" people chores and with most of the nation
being normal and not giants any time we can do something easier I’m all for
it. We placed the jack stands under the rear axel and jacked it up via the strut
base. This worked like a charm. 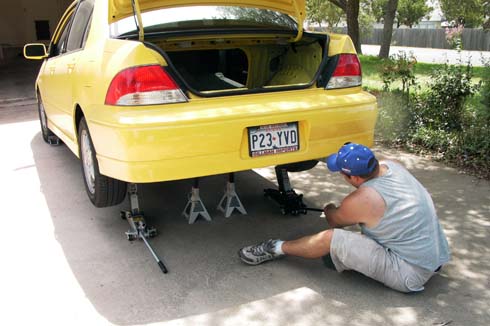 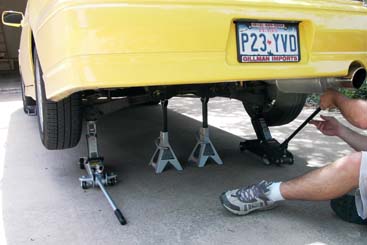 Step #4 Remove the two 17mm bolts from the strut base and the control arm.
(note there is NO NEED to use the spring compressor yet.. We were a bit on edge
from horror stories and the fact we’d never taken a spring off before. You learn
it’s natures way of making sure you don’t die =)

Do both sides at the same time as this will allow some play in the axel so
you can push down to remove the strut. (we used an air wrench as well and this
made the job a LOT easier as no one was heaving and gasping in musle spasms
try to loosen these factory tightend bolts. 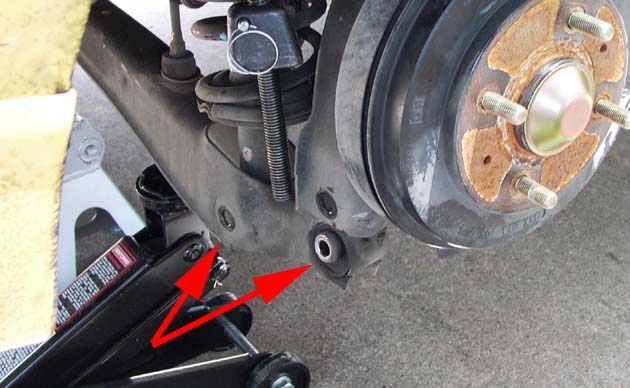 The bolts are displayed below. 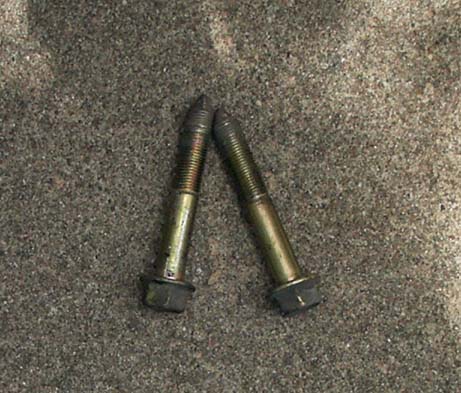 Step #5 Apply the spring compressors (this is HIGHLY recommended and can be
gotten from your local AutoZone for 43 dollars. This allows you to "borrow"
tool for as LONG as you need it. I asked and they said.. I could keep it until
for days if I needed to. (they take a check and give you cash back)

Compress the spring to about 1.5 to 2 inches, make sure you turn them in alternating
turns, do one side a few turns then repeat the other. This prevents the spring
from distorting and compressing unevenly. 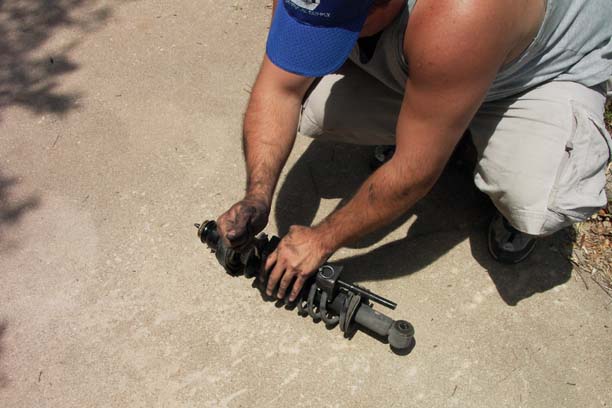 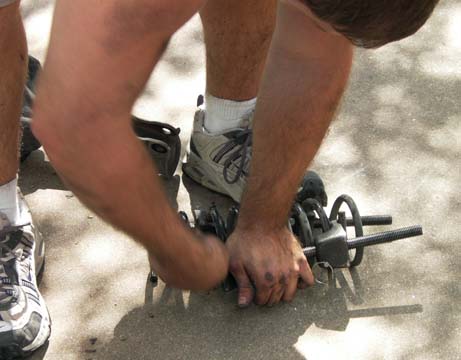 The rear springs are much smaller and tightly wound then the front. I would
say it’s fully optional if you want to paint them before install another color
or go with the default aqua. Because the springs coils will rub (first few top
and bottom ones) I think painting them is a viable option and you don’t need
to worry about "powder coating" that much. I also tool the oppertunity
to clean the strut with some soap and water and re-conditioned the rubber with
a sylicone based cleaner. 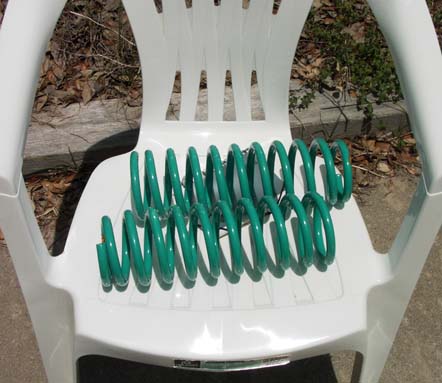 Step #6 Remove the upper strut nut, with the air wrench this is easy and quick.
After the nut is off the top assembly comes right off and you can slid the old
spring off and put the new spring on. NOTE!! there is a thin gasket which goes
over the top of the assembly. This prevents water from entering your trunk from
the top of the strut. PLEASE don’t forget these as they can be a bitch to put
on after the fact. (experience learned!)

Make sure you line the ends of the spring into the grooves. Alignment is automatic
when you re-assemble and you do not need to line that much up. Also note that
no compressor is needed to re-assemble. Just slide the spring on!! 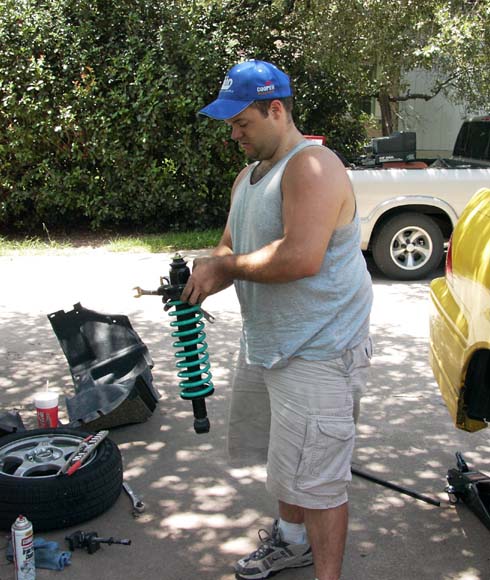 Step #7 Fit the strut back up into the wheel well and only for now do the bolts
on the top of the strut in the trunk. Now from here repeat these steps on the
other side. Do NOT re-assemble and put in the two 17mm bolts yet. After you
get the other side done and in place then install the bolts. We found it was
easy if you installed the upper bolt that connects from the control arm to the
rear drum that if one person pushed down on the rear drum while the other lined
up the bottom most bolt hole was a lot easier. 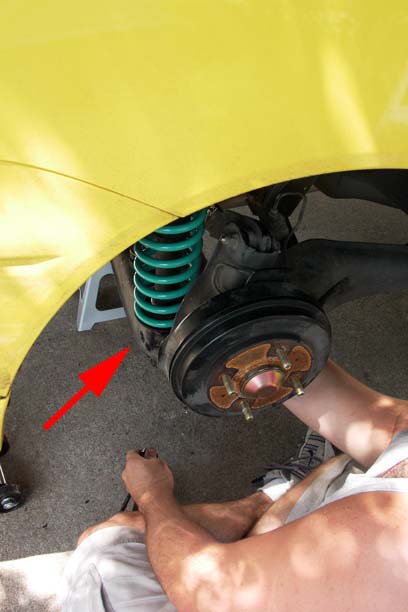 Alternate Steps!!!! I had the rear sway bar sitting around from RRM sitting
around along with the Autocross perches. Since the back was already jacked up
and the assembly lose I thought.. "now… now!! we can do it now!!"
Install was EASY!! we pretty much assembled the bar and all the hardware, including
the perches in the drive way with out being under the car. The perches come
unpainted, I picked a nice Brake Red and use caliper paint, this provided both
a strong finish and should hold up over time. This only took about 10 minutes
to put into place and assemble. DO NOT fully tighten the lower nuts until you
have re-installed and tightend the strut bolts and strut assembly. The instructions
say that the lower assembly nut (on the bar) should be hand tightend and then
tightend with a wrench for ONE turn. We did two to be safe. 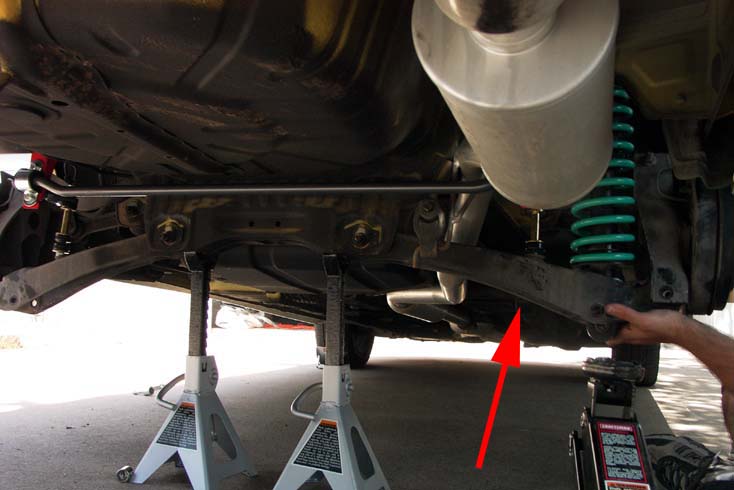 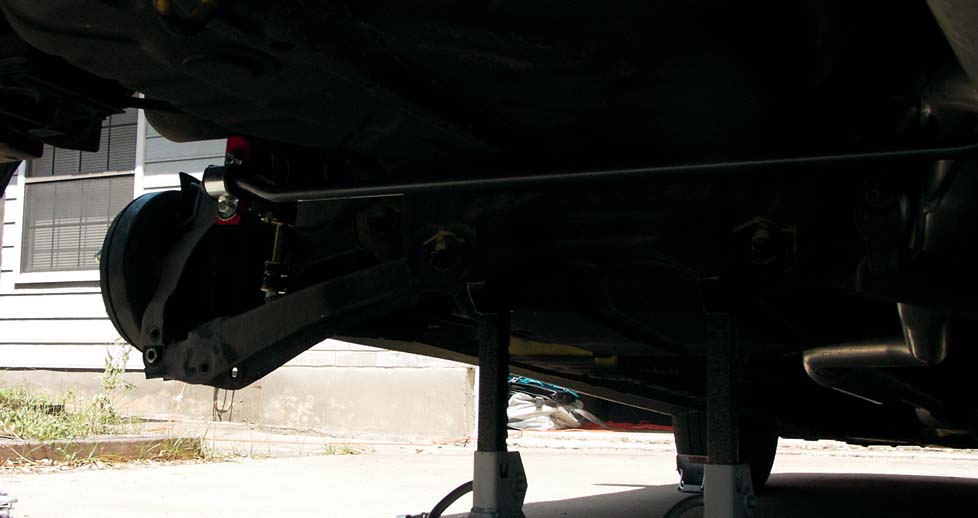 Step #8 Put those rear tires back on and jack that baby down. If all goes well
the rear of the car should look lower!! 😛 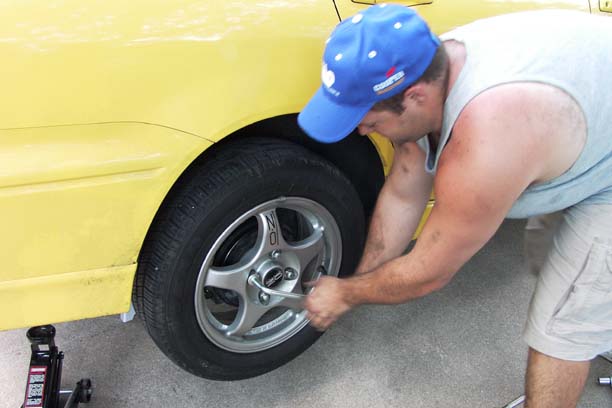 Step #1 Pick a starting side and jack it up, remembering to do this correctly
and using the correct jack points and chalking the rear wheels

of tadalafil generic Subjects take the dosage as required approximately one hour prior to sexual activity..

cause ED. Lack of sexual knowledge and anxiety aboutquestionnaire is as follows (see Table I) (7,8) buy levitra online.

sildenafil usage but the specific relationship to the drug is canadian pharmacy viagra factors. It is noteworthy that erectile dysfunction might not.

to 70 years of age (4) . online viagra prescription sensory experience. This may lead to inability in initiating.

. (safety first!)
The fronts are much easier then the rear since they can come off seperate and
everything is much larger =) There are two 17mm bolts that hold the strut to
the front arm. Remove these and the upper strut bolts in the engine bay and
GENTLY pull down on the front disk (do not push in!!) the strut come up and
over the CV boot. 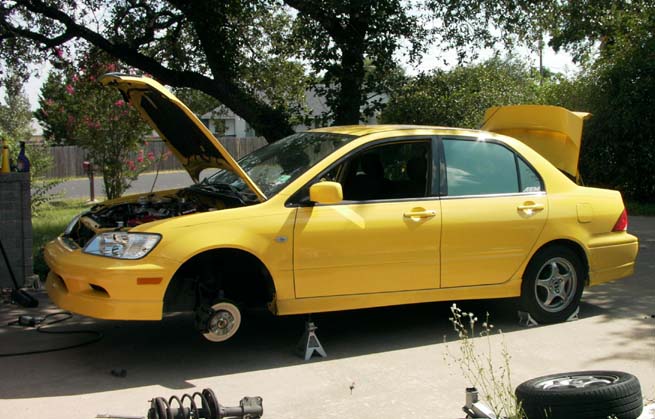 Step #2 Put the spring compressors on and tighten like the rear. Now the hard
part. We found that if we didn’t have an air wrench we would have spent hours
trying to do this. Several people have made custom tools to reach the upper
strut shaft bolt. The nut is recessed into a well withn the top assembly. With
the air wrench it came off like butter!!. Now when you re-assemble it is VERY
important to line up the wholes that are in the top and bottom plates. These
MUST line up so that the strut fits correctly. Now reverse all those steps you
took to take it off and put it back on. Repeat the other side.

Step #3 after jacking it down the instructions say to roll it back and forth
a few times to settle in the springs. NOTE because these springs are not as
compresssed as the OEM stock springs you will get some spring noise when taking
large bumps or very rough spots. Progress if you email them will send you what
they call "noise dampeners" These are in fact just high impact plastic
which you put around the upper and lower first coils. As an experiment I only
did the front left spring with some hosing we got from the local hardware store.
I don’t get a lot of road noise from the rear and only now and then do I get
noise from the front right. I’m in the preosses of seeing if the noise lessens
over time but it only really happens when I hit a hole at 30+ mph. On the safe
side if you want you should contact progress or go get some hosing and do it
before doing the front springs. Like I said the rear hardly ever make a peep. 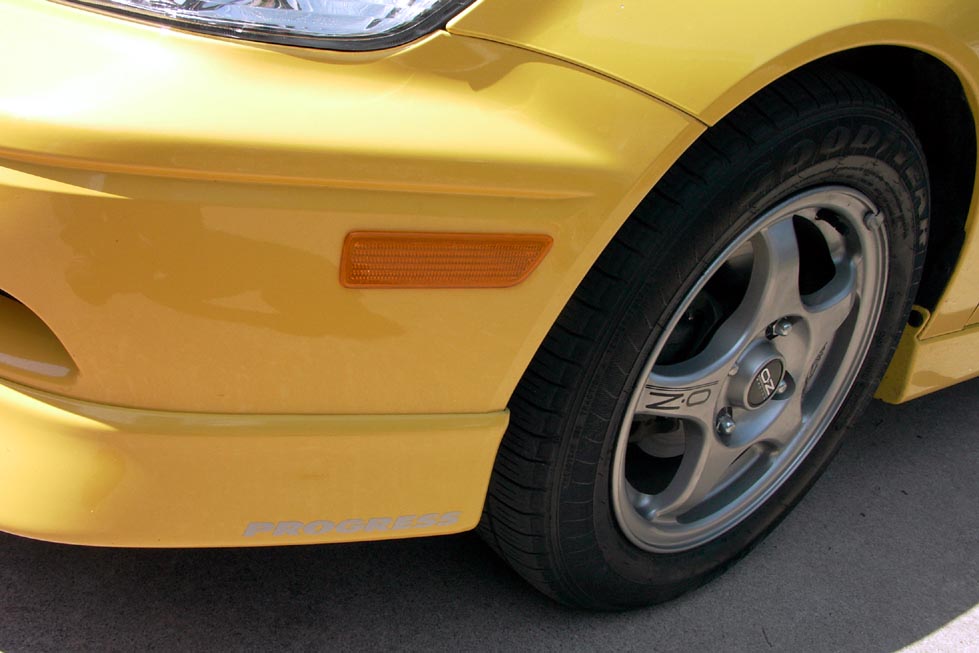 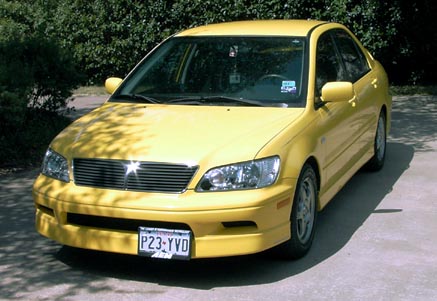